Celebrating #GivingTuesday2021 with our BRIDGE participants

Millions of people came together last week for GivingTuesday 2021. As the biggest day of giving, it’s the perfect time to celebrate generosity, kindness, and inspiring storytelling.

According to GivingTuesday Data Commons, 35 million adults participated in GivingTuesday in the U.S. this year, an increase of 6% from 2020.

As part of our BRIDGE programme, we’re helping hundreds of organizations all over the world on the run-up to GivingTuesday and their end-of-year campaigns. For many of them, it was their first attempt to run a digital campaign and we’re happy to support them in their journey.

Supporting nonprofits during the giving season

During the last few months, we’ve combined a mix of content opportunities to facilitate learning and peer interactions:

Lightful’s Master Trainer and Senior Advisor, Beth Kanter, shares her experience with our BRIDGE participants during 2021:

“I'm always inspired to see how eager BRIDGE participants are, many of whom are very small organizations, to embrace strategic approaches versus quick, tactical shortcuts that often don't result in long-term success. Participants actively worked at improving their social media strategy practices from identifying measurable goals & objectives, understanding their audience, crafting compelling stories and activating ambassadors to extend their reach and engagement. BRIDGE participants understand that simply using the tools without a thoughtful strategy doesn't give results.

Let me be clear that I'm not saying tools and tactics are useless -- but they need to be deployed in lockstep with a robust strategy.  And, that is just what BRIDGE participants have done, in this case for GivingTuesday, and what they can carry into other campaigns.

Another thing about BRIDGE participants that impressed me and many small nonprofits don't do this is - is that they are willing to learn and improve.  If a GivingTuesday campaign or other social media campaign doesn't work out well as they thought, they don't blame GivingTuesday or Social Media. They deeply grasp that learning and improving is part of the process to get to bigger and better results. In all the sessions I led, participants were curious and asked many questions - no whining about this or this or sceptical resistance. They are open to learning and learning from doing. This flexibility and adaptability are what will help these organizations thrive in a post-COVID world.”

For one of our cohorts in partnership with The Bill and Melinda Gates Foundation, Women’s Funding Network and United Philanthropy Forum, there was an additional award of sub-grants of $500 for each organisation as part of the programme, which we donated during GivingTuesday. Over 100 organisations working in gender equality and racial justice benefited from this initiative, while we also gained valuable insights on the donation process and the user experience (more on that soon!)

Moreover, there was an exciting matched giving opportunity for the cohort funded by the Jessie Ball duPont Fund, which rewarded participants based on their level of engagement throughout their programme. While we’re still collecting data to track their fundraising success, 59 organisations have already reported that they raised $1.5m in November, including $844,000 on GivingTuesday alone!

How our BRIDGE participants joined GivingTuesday

We’ve received many messages, mentions, tags during GivingTuesday from BRIDGE participants who launched their campaigns.

That’s why we’ve created a Twitter Moment to include as many examples as possible. 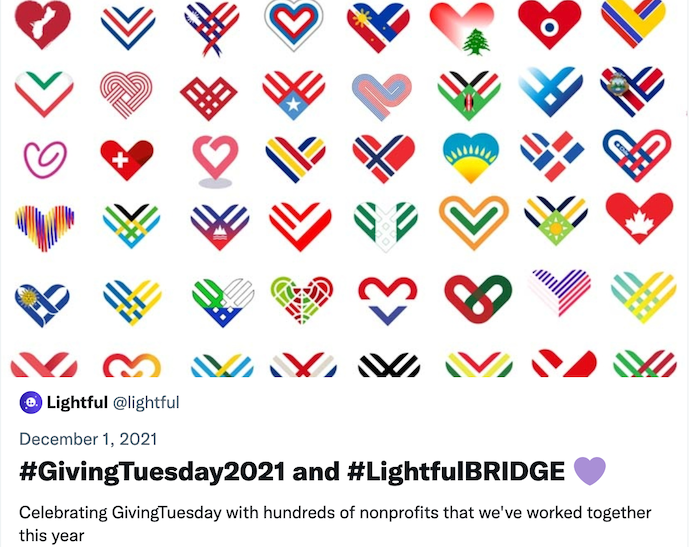 The great thing about GivingTuesday is that it’s not all about fundraising. For example, several organizations from our BRIDGE programme held a giving day in November so they decided to use GivingTuesday as an opportunity to thank their supporters or raise awareness about their work.

One of them was Big Brothers Big Sisters of Northeast Florida who ran a gratitude campaign during GivingTuesday.

Positive Directions combined their awareness campaign that was already live with a fundraising goal for the giving season. As part of the programme, we’ve helped them set SMART objectives with ideas on how to reach them. They were pleased to meet their fundraising target while also growing their followers and their blog traffic. 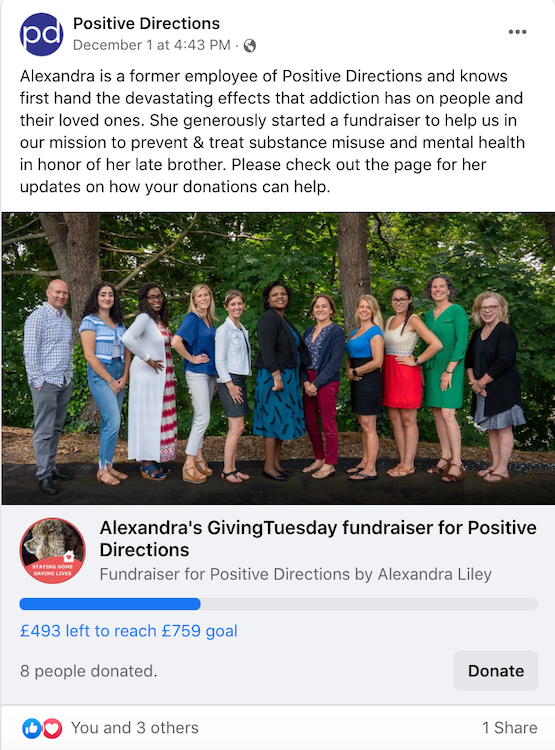 Another BRIDGE participant, Food Rescue US highlighted the impact of their work in their fundraising campaign and how each contribution can be a gift of a meal. They created engaging visual assets for their channels and they made it easier to receive even the smallest donations that could still make a difference. 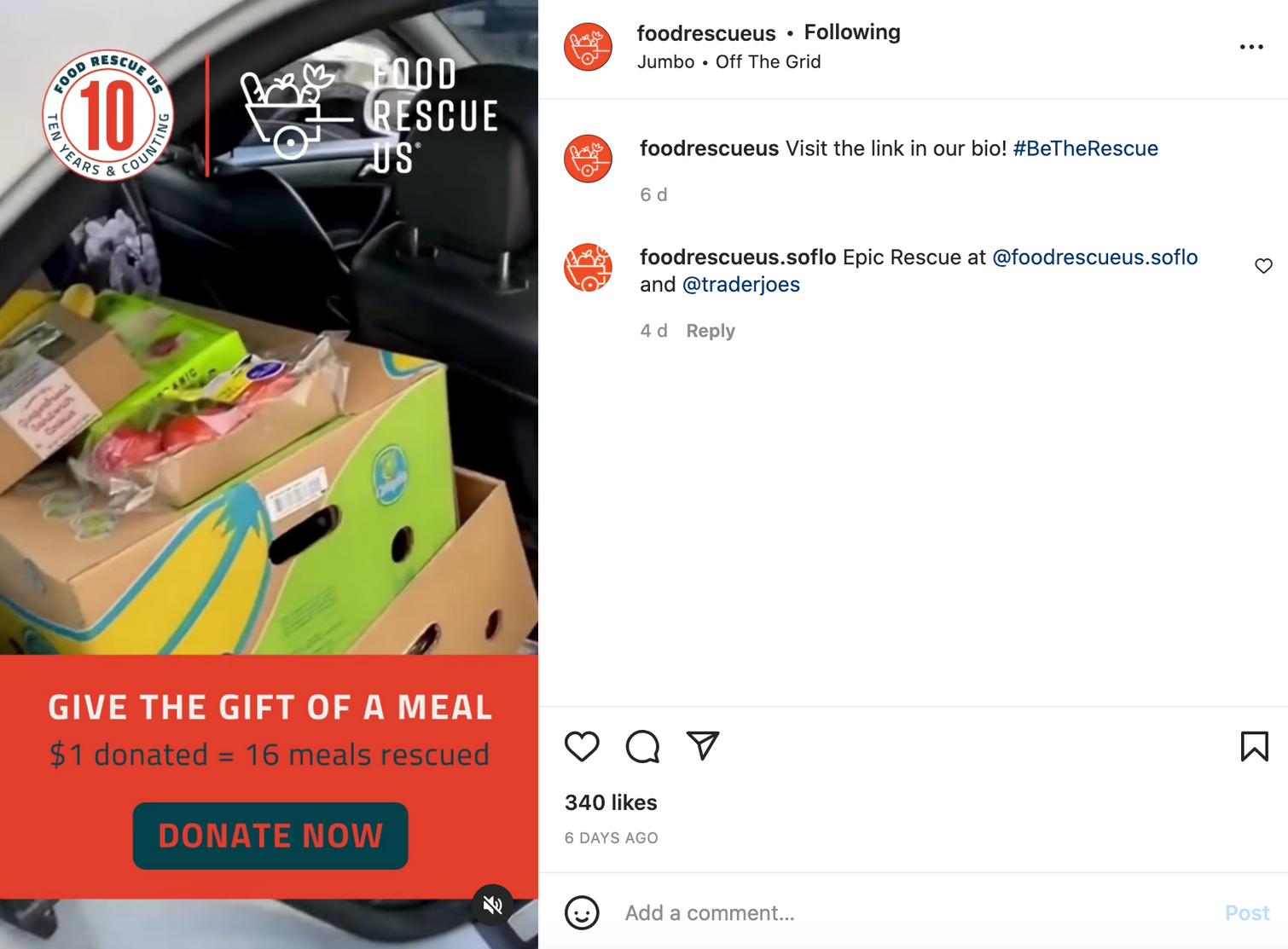 United Way of Delaware raised over $17k in their GivingTuesday campaign and highlighted the importance of planning to turn their campaign into a success. They created the marketing content and videos early in the process, while they also engaged their donors through a series of emails to keep them up-to-date. In their second year now on the BRIDGE programme with the support of The Jessie Ball duPont Fund, they mentioned the importance of the learning tools, discussions and one-on-ones to feel more confident in their digital campaign planning.

Center for Children's Advocacy wanted to raise $2021 during GivingTuesday in an attempt to run their first organised digital fundraising campaign. They ended up raising $2600 through two days of fundraising while they didn’t overwhelm their donors with the additional planning for their end-of-year giving. Engaging their staff worked well to tap into a broader network while they also told us that the BRIDGE programme helped them conceptualize their GivingTuesday campaign in the context of broader end-of-year giving.

I-Collective decided to be more creative with their campaign so they hosted a Facebook Live event during GivingTuesday with a raffle, panel discussion, and live musical and spoken word performances. 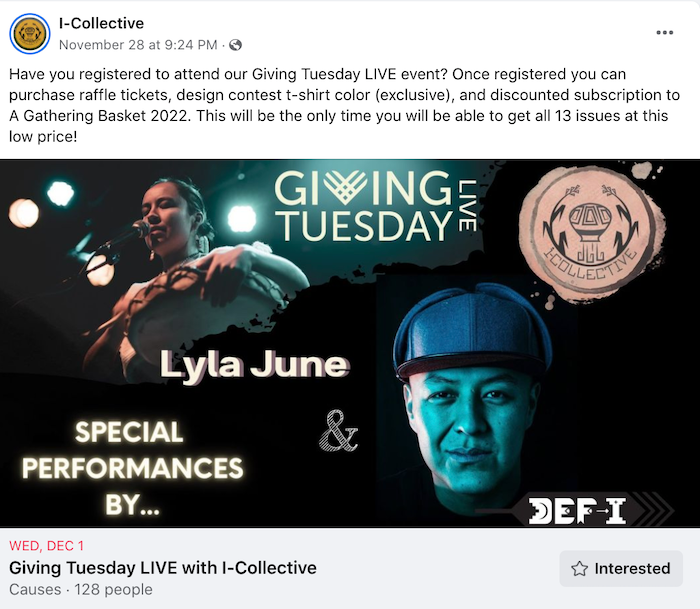 Paula Weiss from WithOurVoice shared her experience from GivingTuesday:

“We didn't participate last year so, this year was much more active of course. We managed to meet our modest goal ($2,500), raise it by $500, and then meet the higher goal as well! I think it worked very well to come up with a colourful visual theme and then prepare a series of FB posts on Canva using that design. It also worked well to have a roughed-out schedule of posts and MailChimp newsletters in advance. We also did a lot of "hovering" on Facebook to publicly thank each donor as the donations came in. Judging from the "likes" we got in return it seemed to be appreciated by the donors, and it may have worked to drive the posts further. I was proud of the lovely testimony and supportive comments made by so many donors. 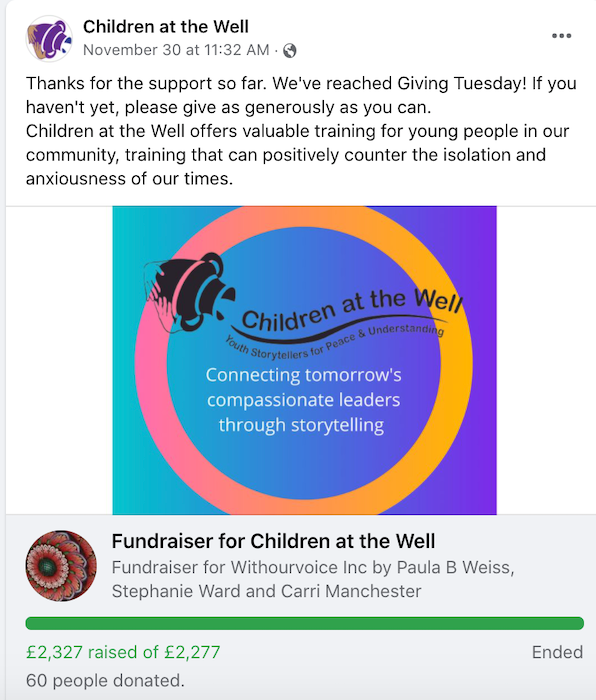 The support from the BRIDGE program was why we had a plan at all, and it was why we felt confident about it. The biggest lesson was that if we put ourselves out there in a confident and colourful way, our fans will respond and bring some friends along, too. It was a real boost to realize that so many people want to help make sure our program continues and that so many people want to be involved in the campaign. Next time we'll be sure to determine who our ambassadors are well ahead of time and work with that group to make sure they have what they need to help the campaign. We'll make calls and talk things over rather than relying on a group email. We assumed some would be on board who didn't end up responding. On the other hand, others ran with it without even being explicitly asked!”

We were very pleased with the initial findings from GivingTuesday and we’re still working closely with all organizations to support them in the next steps of their journey.

Our MD of Lightful Learning, Jonathan Waddingham shares his thoughts:

Many of them are still new to digital fundraising, and GivingTuesday gives them an excellent milestone to build a campaign around and to test their fundraising skills. It can be very daunting to fundraise for the first time, but with the support from their peers and our relationship management team, they have managed to take their first step towards being effective digital fundraisers.

They will all have learnt so many lessons through this process, and so the next time they raise funds, they will be so much more confident and resilient. We’re looking forward to helping these organisations review their campaigns and improve further through the rest of the BRIDGE programme.”

Over the next months, we’ll share additional insights and stories of impact so keep an eye on our blog or subscribe here. 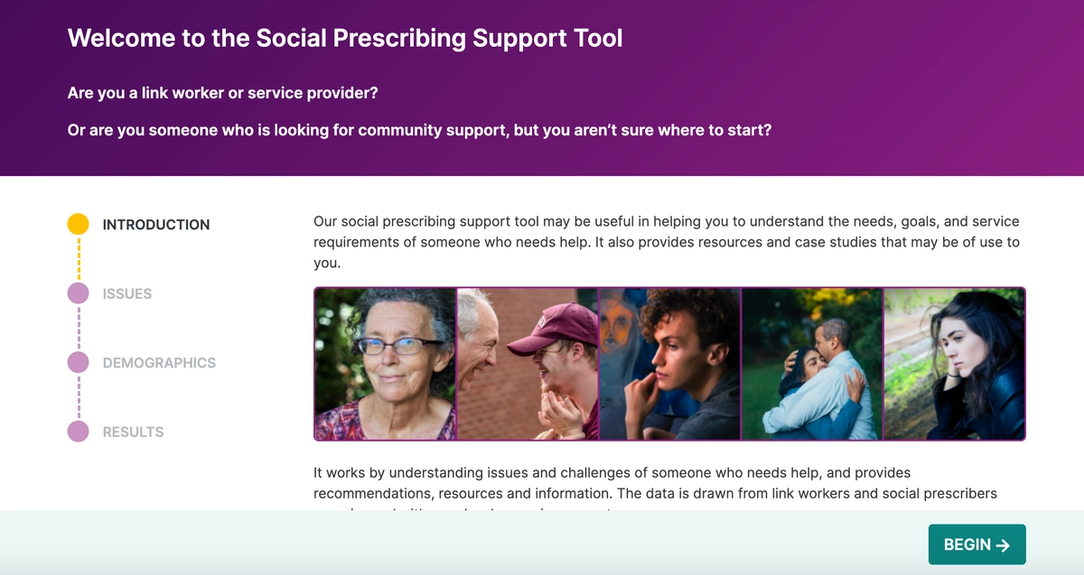 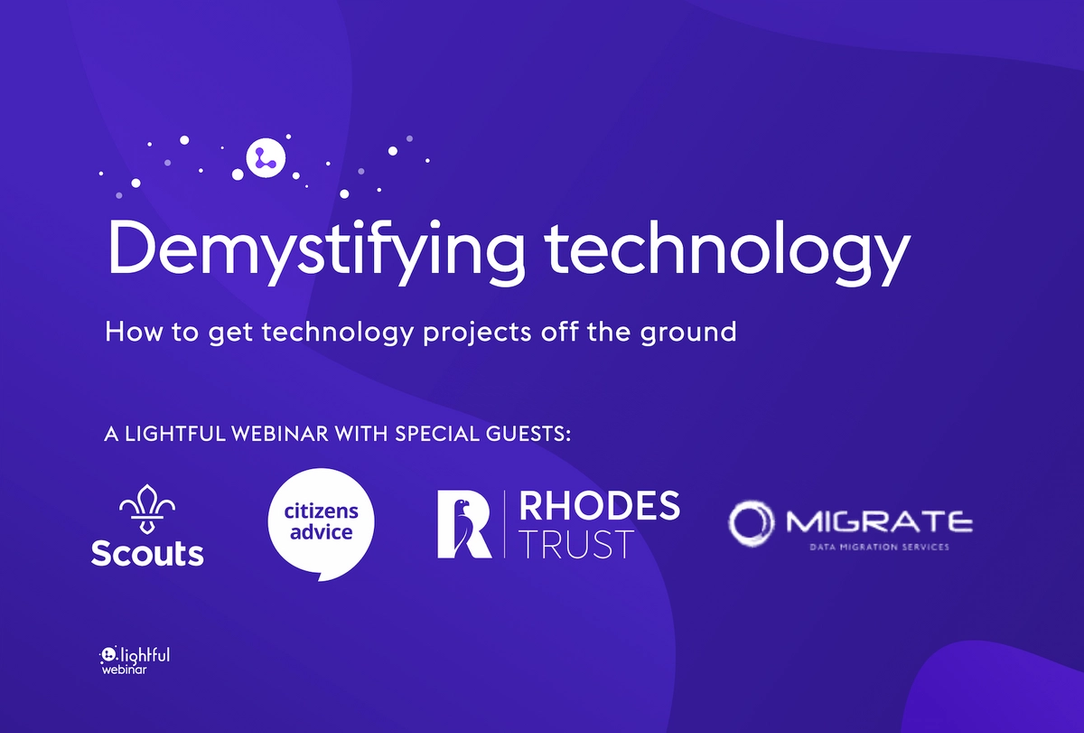 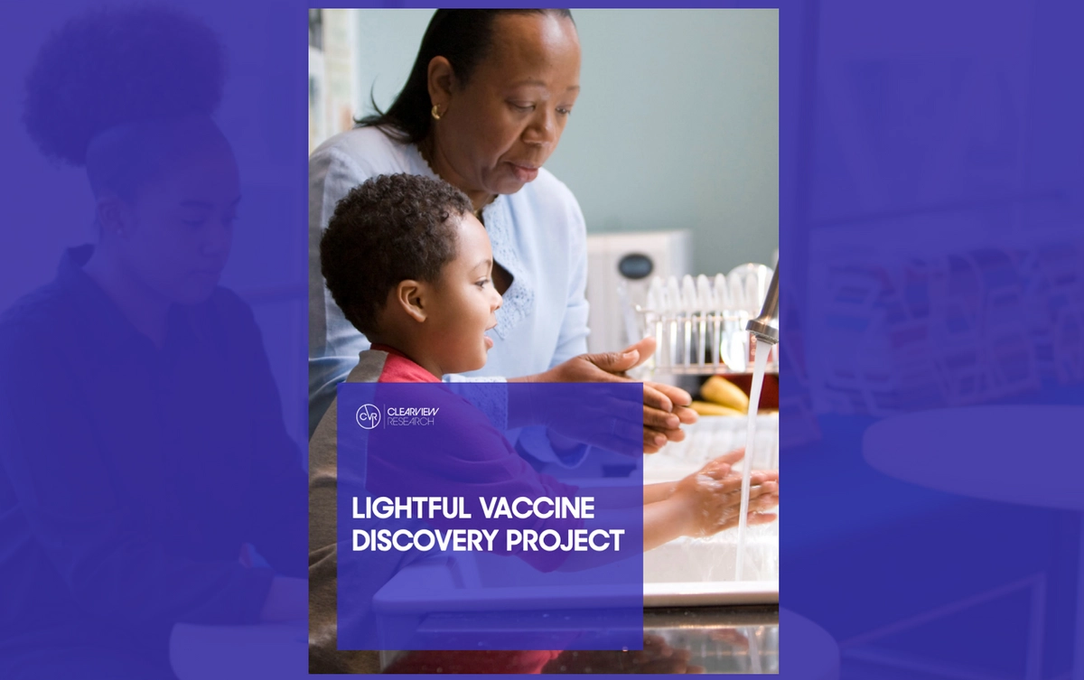 We’re more than 18 months in the pandemic and we’re still seeing misinformation spreading online. Black, Asian and Minority Ethnic (BAME) communities have been disproportionately impacted by COVID-19. Mistrust created by historical racism and health care inequalities has given space to the rise of misinformation and disinformation.