How charities are using chatbots

In our Lightful Predicts Charity Digital Trends for 2018 blog post, our Community Manager Jennifer Rose predicted that the robots are coming. Chatbots have huge potential for the sector – from providing information to bringing supporters closer to the cause. In this post, we share examples of charities who are using bots to raise awareness, engage and even fundraise. We hope it will inspire you to create one.

Most likely the first example of a charity using a chatbot, Walk with Yeshi was launched back in 2016. A collaboration between charity:water and jewellery brand Lokai where you’re invited to walk with a young, Ethiopian girl called Yeshi as she embarks on a two and a half hour journey to collect water.

While you walk with her, you hear about her ambitions to go to school so that she can become a teacher, how she loves cooking with her mother and stories about her brother. The user is asked to send photos, take part in quizzes and answer questions. The whole experience lasts two and a half hours so you are immersed in Yeshi’s journey.

How do you cut through the noise and engage with your supporters on an awareness day that every other charity with children would be tapping in to? You do something different, of course. For World Children’s Day on the 20th November, UNICEF launched a Facebook chatbot campaign #KidsTakeOver. Here’s how it worked:

The Climate Reality Project is a small charity with just one person in their communications team. They set up a chatbot themselves on Facebook to build their email list and educate people on the importance of taking action on climate change. This is a really clever and simple way to grow your audience and just shows that chatbots are not just reserved for big charities. 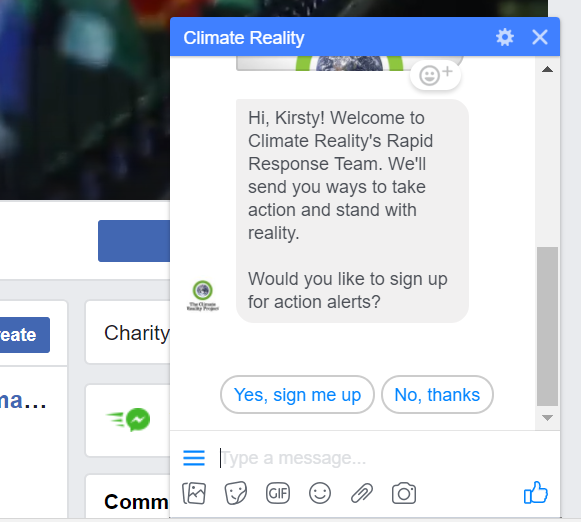 As part of their #Untapped appeal, which invited supporters into the world of the villagers of Tombohuaun in Sierra Leone, who were getting clean water for the first time, WaterAid created a Facebook chatbot. Supporters could speak to Sellu, one of the villagers who has three young children and find out about him and his family, village life and how getting access to clean water will improve their lives. 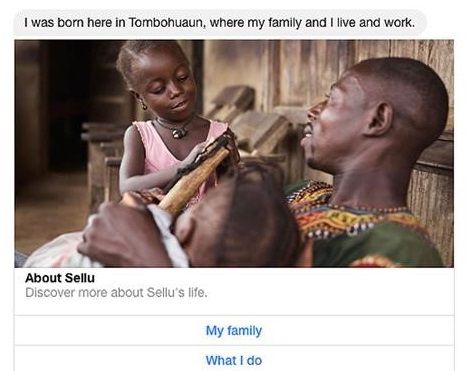 It was very important to WaterAid that the villagers were involved in the whole process and Sellu really did help create the chatbot in terms of content. This campaign has had amazing feedback:

Unlike the above chatbots, Mencap’s chatbot lives on its website rather than on Facebook. The chatbot is part of their #HereIAm campaign, which aims to help people understand more about what it’s like to have a learning disability through talking to Aeren who is learning disabled. Another difference is that people can’t ask their own questions, rather they have to choose from pre-set answers (a decision tree). Although this may seem less ‘human’ than the Facebook chatbots, Aeren certainly feels very real. Most importantly, Mencap reported that the chatbot has led to a 3% increase in awareness of the charity. 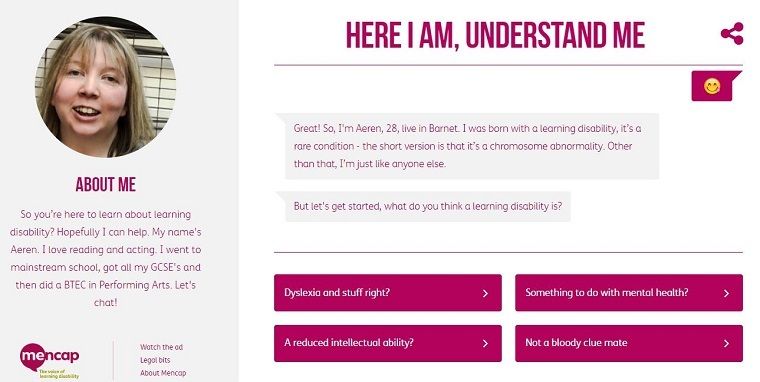 Have you seen any other great charity chatbot examples? Let us know! Tweet us at @Lightful.