If you were to purely take national newspaper headlines or the evening news as your guide to what’s going on, you might conclude that the world is a very scary place. Equally you may conclude that newspapers and TV channels tend to favour headlines that are shocking or dramatic. Terrorist attacks, political scandals, impending economic disasters. So where does that leave the issues that many of us work on at charities and social enterprises; those issues that sit in the category important, but seldom urgent? How can you engage journalists in your work?

‍This could be for example: long-term health conditions, climate change, youth unemployment, or homelessness. As Hugh Laurie humorously and insightfully points out in this YouTube video, we’re much more likely to be killed by diabetes than a terrorist’s bomb, yet news coverage is very skewed towards subjects like the latter. Major health issues like diabetes and cancer of course make the front pages as well, but usually are only covered in one of two ways: 1. Shock, eg. record numbers of people are dying of diabetes, or 2. There’s been an incredible breakthrough, such as a new miracle drug treatment.

Here are a couple examples of how climate change has traditionally been covered using the shock approach: 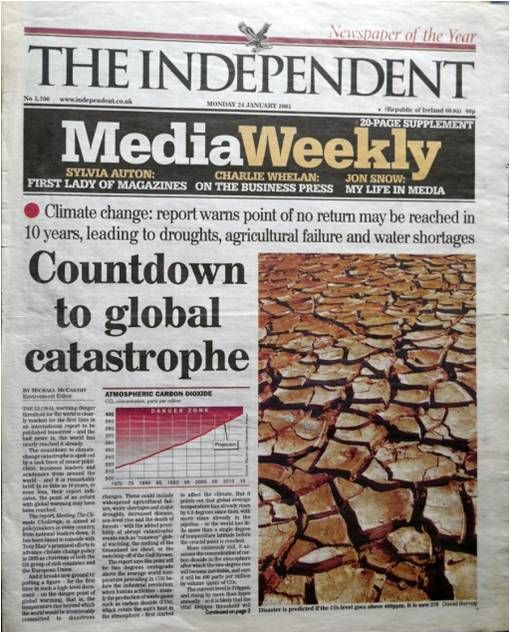 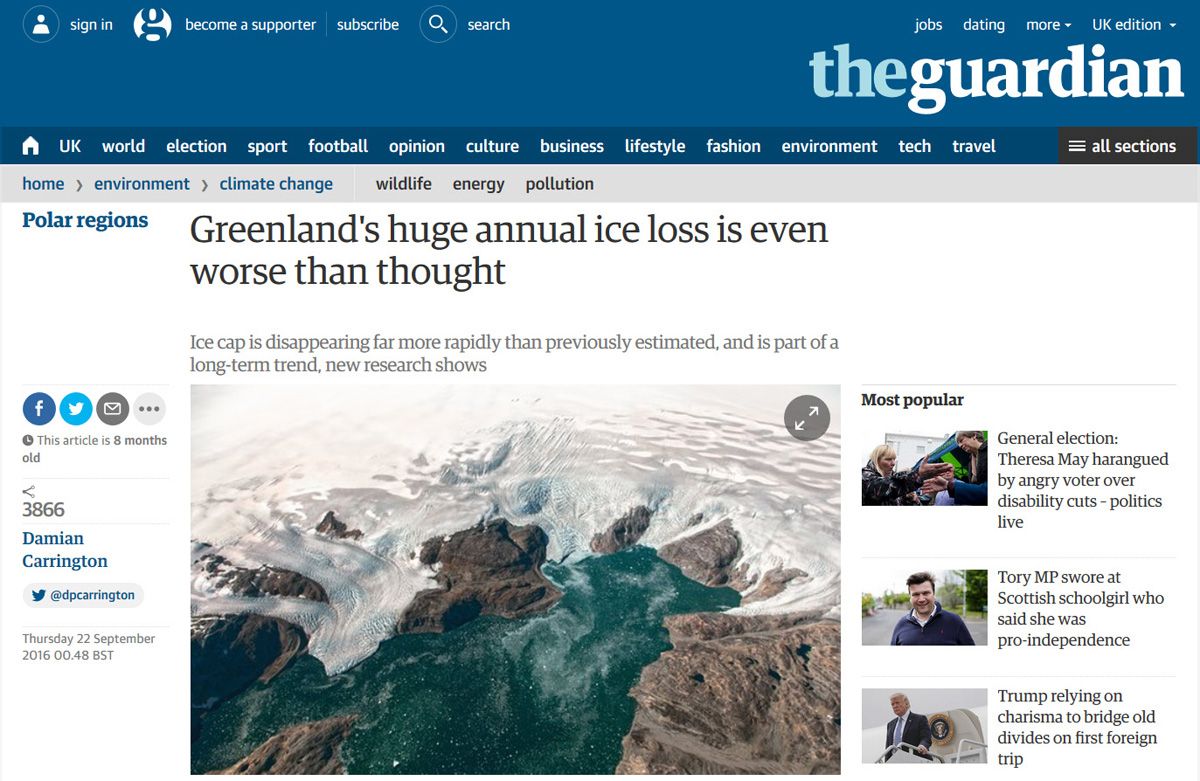 We’ve all heard the saying ‘bad news travels faster than good’, and psychologists and anthropologists will say that this is part of our human DNA and has served as a useful survival mechanism, however, how helpful are either of these front pages? Our primary reaction to headlines like these could be fear, anxiety, or even apathy due to the perceived scale or overwhelming nature of the risk. In some cases headlines like these may inspire action. However the newspaper isn’t really helpful in this regard as it leaves the reader hanging, ‘there’s this massive danger that is a threat to our existence, and its really serious, and we’re totally unprepared’. Of course, newspapers are savvy enough not to leave their readers in this state, and what follows is something that could be called the science of distraction. Just to make sure you’re not left imaging an appending apocalypse, please turn to the next page where we have some important news about the Bake Off finals – ah, everything is going to be alright after all!

‍There is however a growing brand of journalism being championed by leading journalists, psychologists, and editors across the globe. Often called constructive journalism, articles may well highlight challenges to society like the above, but cover them in a constructive way, such as by looking at underlying causes or including details about people working on solutions. This is an approach adopted by publications such as Positive News and Jupital in the UK. It is also a feature of many local newspaper journalists and bloggers, such as those who write for the Huffington Post. This makes sense as local journalists may have closer community ties and bloggers are often experts passionate about particular topics, for example, a nutritionist who writes about healthy eating.

‍In being solutions-focused, constructive journalists or bloggers have this in common with charities and social enterprises. This presents a fantastic opportunity for working together as the social impact sector has the stories to tell and the ideas for solving social challenges and solutions-focused writers are looking for uplifting content.

‍But how do you engage journalists and what about the role of journalism as being detached, impartial or balanced? Well we know that this is rarely the case when writers and editors have beliefs, personal experiences, loyalties, and emotions. When it comes to certain issues journalism also plays a part in influencing the outcome which gives an added layer of responsibility. After returning from the horrors of the Bosnian War, BBC War Correspondent Martin Bell said:

“I now believe in what I call the journalism of attachment. By this I mean a journalism that cares as well as it knows; that is aware of its responsibilities; that will not stand neutrally between good and evil, right and wrong, the victim and oppressor”.

Sometimes, like in Martin’s experience, it is hard for journalists to stand by impassively when there is a clear need and social benefit for standing up for a cause. Recently a great example of standing up for a cause has been the Evening Standard and its coverage of the challenge of food waste across the capital. This follows a tradition at the Evening Standard of campaigning for social change in London, addressing issues such as air pollution, gangs, and knife crime. 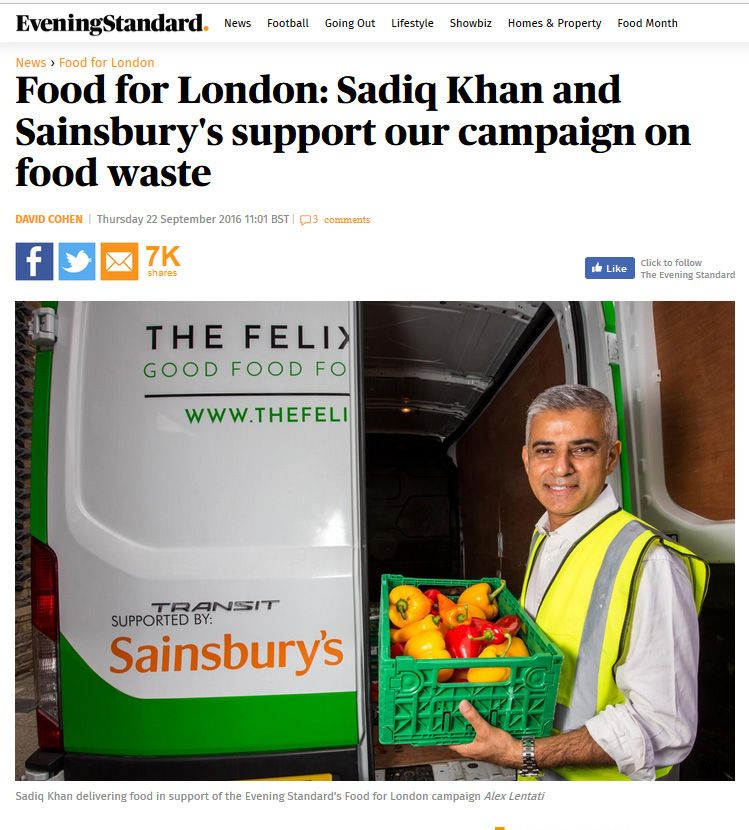 The newspaper’s coverage of the issue is done in a strategic and constructive way, being linked to their Food for London initiative which aims at redistributing surplus food to tackle food poverty. Although the initiative initially followed a ‘shock style’ investigation into supermarket food waste by the paper’s campaigns editor David Cohen, a partnership with the charity The Felix Project who work to reduce food waste and food poverty, and subsequent more solutions-focused pieces has helped create a constructive loop.

‍So far, £1.6 million has been raised by the newspaper’s campaign, of which £360k has been given out in grants to 28 grassroots groups using surplus food to tackle food poverty with the rest of the funds going to The Felix Project. In addition they have forwarded over 250 volunteers getting in touch to offer their time to the charity.

‍Daisy Fletcher, Development Manager at The Felix Project adds “The partnership with the Evening Standard has helped Felix grow phenomenally fast. We now have 60 plus suppliers, and supply 80 plus charities”.

‍As well as raising the profile of the Felix project, the partnership with the Evening Standard has helped in developing further collaborations. One of these is with Europe’s top rated chef, Massimo Bottura, who will be the first in a string of top chefs cooking at Refettorio Felix during London Food Month. The pioneering new community kitchen, which will be launched this June aims to serve more than 200 meals using five tonnes of food.

‍As seen here, the combination of change makers on the ground with media professionals who help create societies narratives can be a powerful force for good. When you engage journalists and editors you may find that many, like yourself, are committed to making a positive difference through their work and can do so much more effectively through creating solutions focused alliances with organisations like yours. Essentially this collaboration can help weave together stories of hope and practical solutions that at their core mirror the purpose of the social impact sector.

‍In the spirit of constructive journalism, if you’d like to find out more or get involved with The Felix Project please visit: http://www.thefelixproject.org/

You may also want to consider signing up to Olio, a free app that connects people with their neighbours and local shops so surplus food and other items can be shared.